Your browser is no longer supported. Please upgrade your browser to improve your experience.

JJ was spotted looking through the studio window during the FM broadcast (2015) and one of our staff invited him to take part in the broadcasts. JJ has issues concentrating for substantial periods of time and has low confidence.

“I feel a lot more confident to talk to people generally – I get on well with people a lot easier. And knowing other people who do it I have met a lot more people. I actually feel connected to other people. It makes me feel I’m helping someone else by letting them hear music which is fresh and new. It makes me feel a lot more alive inside and I get to experience all the fun. If you compare me from my first FM show to now I sounded a bit like a robot back then now it’s more natural. When I first started listening to myself back it used to be horrible, it just sounded so wrong. Now it sounds fine it, it sounds perfect and I feel good about myself and everybody helps me. Love it. Nothing better I could be doing right now.”

JJ was spotted looking through the studio window during the FM broadcast (2015) and one of our staff invited him to take part in the broadcasts. JJ has issues concentrating for substantial periods of time and has low confidence. His relationships with his peers often times get into difficulties as he struggles to understand boundaries and other YP seem to get frustrated with him easily. He appears lacking in opportunities and his parents appear to work long hours at the local pub. He reports spending a lot of time playing computer games or in the bar with adults drinking. His mother suffers from mental illness. 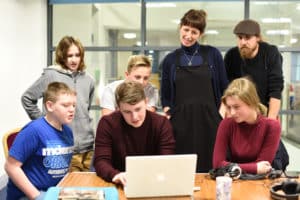 JJ became an enthusiastic and committed member of the team. He broadcast a live monthly show with a friend and produced several jingles with support from staff members. JJ became more positive about himself since his involvement with Ocean Youth. He took part in one FM broadcast, a carnival “Pop Up”, the Radio Drama Project and travelled to London for the first time on a trip to Radio 1 and Reprezent FM in Brixton. On this trip he produced a feature from an audio diary of the day.

“JJ has definitely built his confidence since working with the radio. He regularly diSound Communitiesusses how he is getting on with members of staff. Previously, he has been very quiet and shy, but his personality within lessons is more outgoing and extrovert, now he knows he has something outside of Sound Communitieshool that he is good at and enjoys.”

“In the time that I've worked with JJ I have seen a considerable change in him. His speaking and listening skills have dramatically improved, he had a very short attention span which made it very difficult to discus ideas with him. He is now able to work confidently as part of a team, especially allowing colleagues time to speak and finish sentences.”

“Since JJ has been attending and taking part with the radio at Park field he has become more confident and out-going. He never stops talking about what is going on at the radio club. He enjoys taking part in the trips and the shows as well.”

Get the latest on events, shows and other updates by joining our newsletter