Your browser is no longer supported. Please upgrade your browser to improve your experience.

“For me it's a release. If I get stuck on something and can’t get it off my mind I’ll write it down and it's a way to get my voice heard.”

Liam experienced difficulties at school. When his mum died in January 2017 he turned to drugs, fell out with his dad and became homeless. He is now leading opportunities for other young people facing complex challenges and has even started his own label, Oceanside Records, with our support.

Liam, aged 17, had experienced difficulties at both primary and secondary schools. When his mum died in January 2017 he turned to drugs, fell out with his dad and became homeless. Although he always liked music he hadn’t found a way to engage his passion. He had regular contact with a youth worker who encouraged him to go along to Sound Communities Friday night open access sessions, as part of the ‘Music Up!’ project, at Sound Communities studios in Paignton 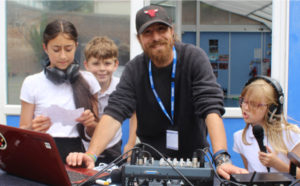 Liam started attending sessions regularly, writing his own lyrics and learning about production. He was then offered the opportunity to do some work experience with Sound Communities. In addition to learning technical skills this gave Liam the chance to shadow other Sound Communities workshop leaders. By doing this he learnt communication techniques to support and engage other young people. Motivated by the experience Liam enrolled onto a two-year BTEC Level 3 course in music production, to run alongside his hands on work with Sound Communities.

Building on the success of the Friday night sessions Liam and the Sound Communities team set up a record label and started working towards an EP. As part of this Liam helped other young people think about their lyrics, what they wanted to say and how they were saying it. Working together they released a song with a music video titled ‘Welcome to Torbay’. This proved to be an effective way for young people to express themselves, feel heard and noticed. Mike Cook, Sound Communities workshop leader notes:

"This song really focused on young people being heard. When we released it, in the space of about a week, it had 17,000 views and 11,000 unique views, predominately in Torbay. We’ve never had a reach like that before, its been exciting to think we can get young peoples voices raised to a platform like that"

For me it's a release, if I get stuck on something and can’t get it off my mind I’ll write it down and it's a way to get my voice heard. When the lads first came in they were talking about stabbing and stuff like they were up in London, so by making this EP and joint track ‘Welcome to Torbay’ I think we managed to channel their energy into speaking about Torbay and what its like to live here... We’ve put it on YouTube, promoted it all over Facebook and now it’s on like 17,000 views! There’s no way a random teenager from Torbay can put a post on Facebook and go viral for just saying your opinions, your views. People can see it’s something for the community, for music and helping people and they are actually listening to the lyrics and hearing what we are saying…I think it’s like one of the only ways these days that teenagers can get across to people how we feel, this is what it’s like living here, this is our opinion, this is us.”

Through his work experience role Liam has been able to offer peer support to other young people. His confidence and beliefin his own abilities has grown through the opportunity to be useful, make a difference and be valued. Drawing on his own personal experiences he has a good understanding of how this can impact on behaviour within the wider community. Because of the support he gained working with Sound Communities, alongside his practical skills at college, Liam has developed effective ways to engage other young people with empathy and insight. Recognising his potential, Mike suggested he apply for a paid training position to be a music mentor, funded by DAISI

Our team are responsive, flexible and able to work in a diverse range of settings. Our approach engages some of…

Our work is participatory, creative and accessible to all

Read the stories of some of the most inspirational young people we've worked with...

Get the latest on events, shows and other updates by joining our newsletter